Skip to content Skip to main menu
Home › About Me 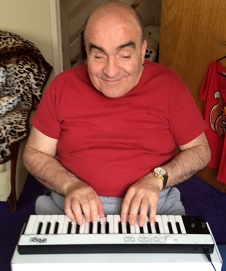 There are those who refer to me as “one man and his keyboard” due to my travel experiences. I was born in 1957 in Birmingham. From a very early age I could be found tinkering with my mum and dad’s piano in the front room. I am given to understand that at the age of 3 I would sit on the little stool playing simple nursery rhymes and would cry if I was taken away from my beloved piano.

I attended a boarding school for visually impaired children and whilst the other kids were outside playing football and partaking in various sporting activities, I could be found in one of the cloakrooms bashing out the latest pop song on the somewhat out of tune piano.

At the age of 11 it was decided I would take piano lessons and while it is fair to say I passed 2 music exams (one with merit and the other with distinction), I was very hard work for my somewhat patient tutor – when she would leave the room for a moment, on her return, I could be found composing something she had never heard of in her life which was not relevant to the actual lesson!

At the age of 13 I started creating my own songs, these being instrumental works. At 15 I wrote the lyrics for a song entitled “Times Again” which was dedicated to my second girlfriend who was leaving school that summer. I even persuaded my piano teacher to write the music down on paper to see what it looked like. On letting my best friend Reg hear this song I would only play the melody but refused to sing. After some encouragement I eventually sang the song. To my absolute surprise I was told that I had a great gift and should keep it up.

In 1972 while at school I formed my very own pop group this being called “Overdrive”. We were given the name from a friend who was mad about cars. The line up consisted of 2 other members (one on drums and the other on guitar) with me on the piano and vocals whilst the other 2 guys would harmonise. We, to use my words, “were going to make the big time”. Well we didn’t quite make Top of the Pops but we did win a talent contest in 1973 with the use of some very primitive sound equipment made up from parts of old record player amplifiers. I can always remember being announced by the compere “and now we have our very own “Overdrive”!” To my absolute embarrassment, due to the poor equipment, I heard through the speaker “This is the BBC and now the 9 o.clock news” which fortunately faded away and we began our rendition of 2 well-known chart toppers and one of my own songs.

I left school in 1975, and would jam with some of the local musicians in my town but had my heart set on being a solo artist so, with the use of 2 old reel-to-reel tape recorders, continued recording my own songs.

During the 80s my musical style was beginning to change. I would travel to London attempting to promote my compositions. I also started my own mobile disco and would appear at various weddings, parties and children’s events. I then took it upon myself to become a DJ, working at the nearby hospital radio station.

During the 90s I would travel as a street entertainer with my keyboard, playing well-known instrumental songs. Raising funds in various shopping centres for needy causes such as The Children’s Hospice and, on one occasion, a mother and baby unit. I can remember at one event a lady coming up to me and asking if “I had it long” When enquiring, I was convinced she was saying your Casio keyboard. I replied “No it’s a Roland” She then enquired “Have you ever thought of having it taken away?” I returned “Not really, I need it for entertainment purposes and would be lost without it”, only to discover she was in fact asking me about my cataracs and not the keyboard! On another occasion another lady enquired “Do you know “Lily Was Here” (as in the instrumental song) to which I replied “I had no idea but if I see her I will mention the fact you are looking for her!” which caused an uproar of laughter.

In 2003 I received a Director’s Award of Merit for Excellence in Songwriting, as exhibited in the Valentine Song Contest, from the Creative Director of the Paramount Group, Nashville, Tennessee, USA for the song “Time and Place”. This track can be found on my album “Here and Now”.

To this day, I still enjoy performing my material at various songwriter showcase open mic nights. In particular I was somewhat amused to learn that while playing at one such venue in London, the actual bar itself did not have a drinks licence!